❝ Navigate your way through challenging yet fun puzzles, combat, and more in the modern puzzle map of 2018: Chris6dizzle!❞
―Official map description

Chris6dizzle is a Minecraft map created by Chris6d. It was released on October 12, 2018, and requires Minecraft 1.12 to run. The trailer may be viewed here.

❝ Your mission is simple: to navigate through the puzzles, combat tasks, parkour, mazes and more. Your story? Who knows? It is a Minecraft map, after all. You're simply epic, and you have one task: to complete the puzzle. Are you up to the challenge?❞
―Description on the forums

Chris6dizzle is a Prismarine-themed puzzle map that contains many aspects of a typical Minecraft puzzle map: parkour, combat, mazes, and other puzzles. The player must navigate through the map (which is later revealed to be the sewer system of an unnamed city). The player eventually reaches the outside world, which is actually the final stage of the map, in which they must fix a traffic light. The map also contains two Bonus Challenges that, if the player decides to complete them, provide extra Power Cores, the map's collectible score.

The map contains ten (10) levels, or stages, that the player must complete in order to complete the map. An asterisk * denotes that an optional Bonus Challenge follows that level:

The map also contains five achievements, which are naturally unlocked as the player advances through the map. They are: 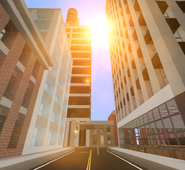 Official cover photo for the map.

CaptainSparklez playing Chris6dizzle.
Add a photo to this gallery

Retrieved from "https://torn.fandom.com/wiki/Chris6dizzle?oldid=1701"
Community content is available under CC-BY-SA unless otherwise noted.